The history of the G20 summit

The road to Hamburg 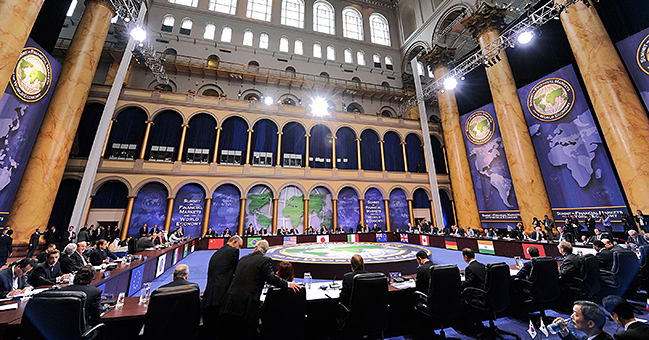 In November 2008 G20 leaders met for the first time at a summit in Washington DC Photo: Bundesregierung/Kugler

The G20 meetings at the level of heads of state and government, owe their existence to the 2008 financial crisis. The G20 finance ministers and central bank governors had been meeting regularly since 1999. In the dramatic early days of the financial crisis in 2008, it quickly became apparent that the necessary crisis coordination would only be possible at the highest political level.

As a result, the meetings of G20 finance ministers and central bank governors were raised to the level of heads of state and government. Since then, the G20 leaders have met regularly, and the G20 has become the central forum for international economic cooperation.

The first G20 summit of heads of state and government was held in 2008 in Washington DC. It set the scene for the most dramatic reform of global finance for over 60 years. At the follow-up sin 2009 in London, the G20 agreed to blacklist states that refused to cooperate on efforts to tackle tax evasion and avoidance. Since then a great many tax havens have cooperated with the G20. In the wake of the 2008 financial crisis, the G20 resolved to impose stricter controls on hedge funds and rating agencies. Institutional reforms included expanding the Financial Stability Forum (FSF) to make it an effective supervisory and watchdog body for the global financial system. It was renamed the Financial Stability Board (FSB).

The G20 summit in Pittsburgh in 2009 established the G20 as a major decision-making body on matters relating to the global economy. This summit also decided on stricter regulations for too-big-to fail banks, requiring them to retain a greater proportion of their profits to build capital. Together, all measures help reduce the financial risk to governments and tax-payers posed by high-risk private-sector activities.

In the face of the negative impacts of the financial and economic crisis on international trade, there was a focus on states refraining from introducing any trade-distorting export promotion measures as part of their economic recovery programmes (the ‘standstill’ provisions), and on the availability of trade financing. In 2008 in Washington DC the G20 had agreed to refrain from imposing new barriers to trade and investment for a period of 12 months. This provision, the standstill provision, has been extended at every subsequent summit.

In Toronto, the G20 summit in 2010 adopted directives to reduce indebtedness. The advanced industrial states were to reduce their budget deficits and endeavour to do without any new borrowing.

In Seoul, also in 2010, the G20 adopted stricter regulations for banks (known as Basel III), as well as a reform of the financial stakes and concomitant voting shares in the International Monetary Fund (IMF). Seoul was also a milestone in the history of the G20. For the first time ever, development policy issues were on the summit agenda, alongside matters of financial and economic policy. Development has since been a standard part of the agenda of every subsequent summit.

At the heart of the work programme of the G20 summit in Cannes in 2011 was the reform of the international monetary system.

The focus of the summit in Los Cabos in 2012 was on fighting youth unemployment and creating quality jobs with social security coverage and fair income. The summit also highlighted the link to the development agenda and to agriculture and green growth.

In St. Petersburg in September 2013 major progress was made on combating tax evasion and avoidance. The G20 agreed on the automatic exchange of tax information and the Action Plan on Base Erosion and Profit Shifting (BEPS), taking on multinational businesses that make a practice of reducing their tax bill by minimising profits and shifting profits outside the countries where the activities deriving those profits are actually performed.

At the Brisbane summit in 2014, the G20 set itself the ambitious goal of lifting the G20 GDP by an additional two per cent. The G20 states reaffirmed their commitment to free trade and agreed to rapidly implement the WTO Trade Facilitation Agreement. Another important step was taken in the field of banking regulation, so that major banks with global operations can be wound up without tax-payers’ money if they fail. The G20 also focused on participation in terms of getting women, young people, older people, people with disabilities and the long-term unemployed into work.

At the G20 summit in the Turkish resort of Antalya in 2015, the G20 looked for the first time at migration and refugee movements. They also agreed on further financial sector reforms, and resolved to support the global climate agreement. This demonstrates that G20 resolutions can generate important impetus for binding agreements at the level of the United Nations. The UN Climate Change Conference in Paris in December 2015 subsequently adopted a legally binding climate agreement, which is intended to keep global warming well below 2° Celsius.

At the summit in Hangzhou in 2016, the focus was on strengthening the inclusive growth of the global economy in the long term, partly by harnessing new sources of growth and raising production potential. The summit, however, also looked at linking sustainable growth and social welfare. The digitalisation of society as an important driver of development and growth was part of the G20 deliberations for the first time. And the G20 reaffirmed that they intended to take concrete action in the field of migration and refugee movements in 2017.