The G20 summit under the German Presidency will be held on 7 and 8 July 2017 in Hamburg. The 20 heads of state and government and top-level representatives of international organisations will probably meet at Hamburg Messe, the city’s exhibition and trade fair centre. 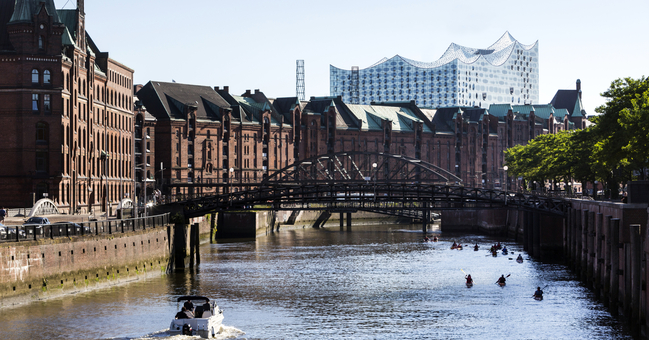 Hamburg - the waterfront metropolis - is the venue for the 2017 G20 summit Photo: Hamburg Marketing/Jörg Modrow

A strong City on the Water

Hamburg is an excellent choice and ideal venue to host the G20 Summit. The north German metropolis has a lot to offer – major event or not. Due to its port, which is located right in the heart of the city, Hamburg has had trade relations with much of the world for centuries and may rightly pride itself on being a cosmopolitan and international city.

The Free and Hanseatic City of Hamburg – the official name of Germany’s second biggest city – is also one of the Federal Republic’s 16 federal states or Länder. Situated in the north of the country, it is one of the most popular travel destinations in Germany. Every year, Hamburg welcomes over six million visitors.

Roughly 1.8 million people live in the metropolis on the water, which is the heart of a metropolitan area that is home to over five million people. Life in the city is marked by two rivers: the mighty River Elbe with Europe’s third-largest port and the smaller River Alster that was dammed up to create a lake in the city centre.

Hamburg is considered one of the most beautiful cities in Germany. At the same time it is an economic powerhouse with the highest per-capita gross national product of all 16 Länder. Compared with other European cities Hamburg ranks fourth in economic performance, preceded only by London, Luxemburg and Brussels.

The Port of Hamburg is over 800 years old. January 2017 will see the inauguration of its latest landmark, the Elbphilharmonie Hamburg [Elbe Philharmonic Orchestra], which is set to become one of the best concert halls in the world. Its wave-like roof is visible not only in the port, but from anywhere in the city. Three concert halls, each with state-of-the-art acoustics, and a publicly accessible 37-metre high plaza will be officially opened on 11/12 January 2017. The Elbphilharmonie is located right on the water, in the heart of the harbour.

For many visitors the harbour is the highlight of the metropolis on the Elbe. Located right in the middle, it shapes the entire city. Even veteran Hamburg citizens love to spend their free time watching the container giants coming in and sailing off amidst the hustle and bustle of smaller boats and crafts moving around on the water.

Anyone watching the behemoths approaching Hamburg just assumes that the city is close to the sea. That’s not the case, though. From the North Sea the big ships, after sailing all the way from Asia or across the Atlantic, still have to navigate some100 kilometres up the Elbe to reach Hamburg.
Modern container ships or cruise liners frequently measure several hundred metres in length. Their spectacular manoeuvres in front of the piers and in the harbour basins are precision work on a large scale. The recent development of ship sizes and draughts has forced Hamburg to implement some structural changes. At a throughput of some nine million standard containers a year, container port operations - Hamburg is Europe’s third largest container port and one of the leading ports worldwide - had to be relocated further south along the river bank.

The port terminal operation areas close to the city centre, which had become too small, now house Hamburg’s HafenCity – a new and inspiring city district that enlarges the city centre by no less than 40 per cent. Located right next to it is Hamburg’s historic warehouse city [Speicherstadt] that has been a Unesco World Heritage site since 2015. Its red brick-stone façades create a picturesque contrast to the modern architecture of HafenCity.

St. Pauli – a City District not only famous for the Beatles

It’s most likely Hamburg’s best known city district: St. Pauli. On and around the Reeperbahn it’s party time at the weekends well into the early morning hours. At the beginning of the 1960s a no-name band from Liverpool performed there, who went on to achieve international fame as the Beatles. Today, St. Pauli boasts the highest density of live clubs in Europe.

On top, the district is home to one of Hamburg’s two football clubs. The FC St. Pauli plays in the second professional football league and has gained a cult following all over Germany, whereas Hamburger Sportverein (HSV) has more fans and members. The HSV is the only club in the Bundesliga - Germany’s premier league - that was part of the inaugural Bundesliga in 1963 and has never been relegated.

Sport is just one of many things Hamburg has to offer. The city is a virtual treasure trove for lovers of culture, who can choose from more than 60 theatres, a hundred music clubs, 60 museums and almost 30 cinemas. No other German city stages more musicals – currently six big productions – which makes Hamburg Germany’s undisputed musical theatre capital. "The Lion King" is shown twice daily at the musical’s own festival hall situated in the harbour.

Hamburg’s cultural diversity is also appreciated by the employees of many leading international companies that set up their German headquarters here. The metropolitan area of Hamburg, one of the most powerful economic areas of the continent and a central trading hub in northern Europe, is only a one and a half hour train ride away from Berlin.

In Germany it ranks top in the fields of logistics, digital, creative and media services. Hamburg is the world’s third largest civil aviation location: 40,000 people work for Airbus, Lufthansa Technik, Hamburg Airport as well as 300 related enterprises and research institutes.
The same is true for the wind power industry. Two thirds of the global knowhow are located in and around Hamburg. In the renewable energy sector some 25,000 people work for approximately 1,500 companies. So it’s no wonder that Hamburg was European Green Capital in 2011.